Over 118 audio reels of varying sizes and speeds, as well as 44 very old and fragile cassette tapes.

The tapes contained one of a kind interviews of world leaders, actors, artists, and other famous people.

We discovered an unknown interview of Alfred Hitchcock on the reverse side of a reel containing an interview of artist Diego Rivera!

Nobody knew the interview existed, until a small scrap of paper with “Hitchcock” written on it fell out of the tape box when we opened it.

This lost interview is a fascinating half hour discussion.  Alfred explains how he finances his own movies, so that he has complete artistic control.

We thoroughly enjoyed restoring and preserving these very rare historic recordings, and hope they become available to the public in the future. 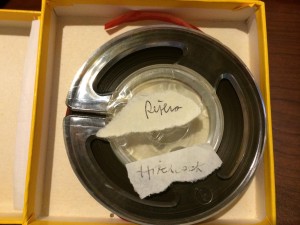 Mass Productions will be rushing this big archive project for the Heritage Foundation in Washington DC.

It is all being digitized to hard drives for preservation and easier access. 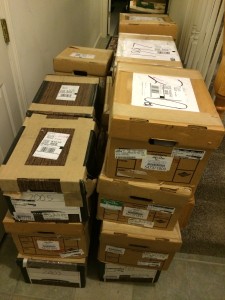 Mass Productions will be digitizing various recordings of Handel’s “Messiah” for the Handel and Haydn Society in Boston. The restored digital audio will be used in an interactive exhibit, on display at the Boston Public Library this fall. We are helping them to prepare their entire archives for digitization by Mass Productions at some point in the near future. 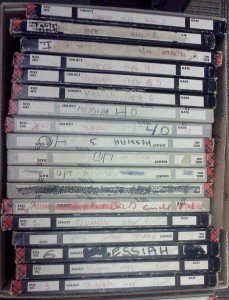 Mass Productions is busy with yet another prestigious project for Boston University. We will digitize over 175 videotapes of lectures by Nobel Peace Prize winner Elie Wiesel!

The lectures are on multiple tape formats,  such as Umatic 3/4, Betacam, VHS, DV-CAM, Mini-DV, and XDCAM.

We will digitize all these formats to archival high resolution video files, as well as mp4 video files for web streaming. 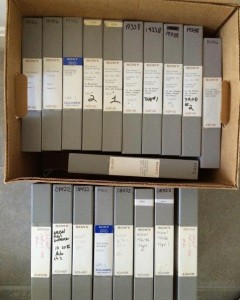 Mass Productions recovered this audio reel from 1965 that was an interview of a Manhattan Project scientist.     The reel appears to have been in a fire or exposed to extreme heat.

Not only was the tape warped, but it was extremely dry, and would break into pieces at the touch.

We re-hydrated the tape with a unique steam process, which softened the tape enough that we were able to recover most of the audio on this reel.

The tapes are part of the Stephane Groueff audio interviews, used for writing his book “The Manhattan Project, The Untold Story”.

The audio interviews are all now available online from our client, The Atomic Heritage Foundation. 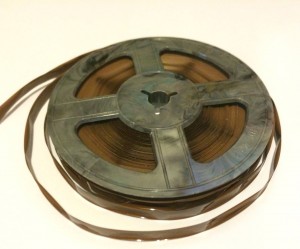 We are just about finished with the Atomic Heritage Foundation audio archive. The tapes are interviews of scientists involved with the Manhattan Project. Some of the tapes we restored are now online.

You can listen to one of the recordings of General Leslie Groves on the “Voices Of The Manhattan Project” website here.

Archive the Audio & Video media in your library to reclaim space!

Are you considering digitizing the outdated audio& video media in your library or archives? If you don’t have the budget because you are planning expansion for more space, think about this… It would be more economical to digitize your tapes, videos, records, and film to drastically reduce storage space. Then you can reclaim this space for other purposes. Digitizing is a one time cost. The longer you put it off, the more expensive it will be to recover the deteriorating media. Now that school is out, give us a call and let’s get started!

The cassette tapes contain interviews of university alumni in the early 1970’s.    They had graduated many years ago when it was called “The Fitchburg Normal School”

Many of the Alumni were residents of the town of Fitchburg, and the recordings are consider historic documents for the town.

Due to the age of the early cassette tapes, many of them required repairs.    We restored every tape and digitized them to preserve them to a permanent online digital archive. 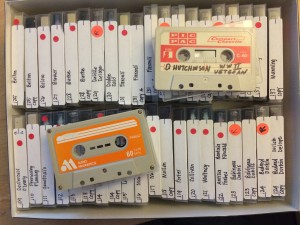 Recently, we digitized a rare punk rock recording for Bridge Nine records in Peabody MA.    This performance by DYS was recorded live at the legendary CBGB’s in New York city.

Selections from this recording will be pressed on a 45 RPM vinyl record and sold on their online store.    We are very excited to have our work pressed on vinyl! 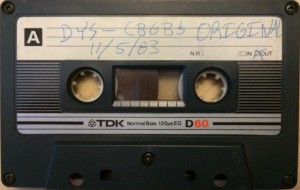 Today WZBC 90.3 in Newton broadcast a 40 year old Berklee Jazz recording called “Gods Trombones” that we transferred.    Some of the original musicians were in the studio talking about the recording, and thanked us live on the air! Click on the play button to listen.